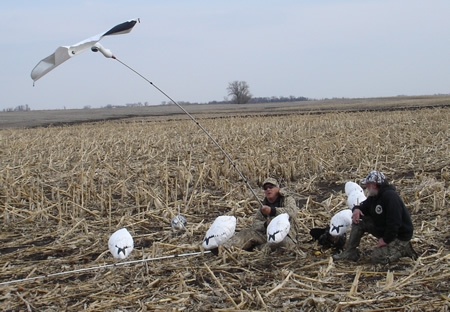 We were lucky enough to have Randy Bartz in the area while we were hunting snow geese in South Dakota. Randy was in the neighborhood testing the latest in his Flagman line and we got to see him in action.

In the past, some hunters took this "motion notion" and added to it with simple things like waving their hats or arm at a distant geese or ducks to catch their attention and bring them closer to the decoys. Other hunters went even further with this movement concept, using strips of bird-wing colored cloth attached to long sticks for waving at waterfowl. 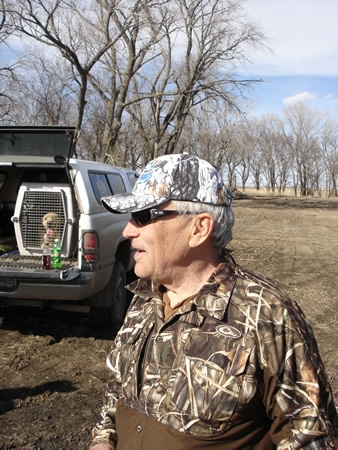 Then along comes Randy Bartz, an avid water fowler from Oronoco, Minnesota with the idea of putting these motion simulating flags on a vertical plane to make hand operated bird wings. With the appearance of the live geese in the air landing or stretching their wings on the ground, Bartz created the illusion of real geese moving over and in the decoys.

Waterfowl bought the concept and so did goose and duck hunter. "I've never had a single product returned," Bartz says, "because some hunter thought it didn't work."

And now 20 years later, Bartz is still producing the most popular, least expensive, and most effective motion decoy available to modern waterfowl hunters.

Take a look at the Snow Goose motion decoys Randy brought for us to test.